Any Flowgear Workflow can be published as a REST API. Common applications for this capability include:

Open the Site Detail Pane by clicking your Site name in the left-hand menu and then choosing Edit this Site.

If you intend to invoke Flowgear from a client that applies Cross-Origin Resource Sharing (CORS - https://en.wikipedia.org/wiki/Cross-origin_resource_sharing), provide a list a allowed origins in the Allowed Origins textbox or provide * to permit all origins.

After saving changes, a DNS record will be created. An error will be presented if the syntax of the specified Subdomain is invalid or the chosen Subdomain has already been used. 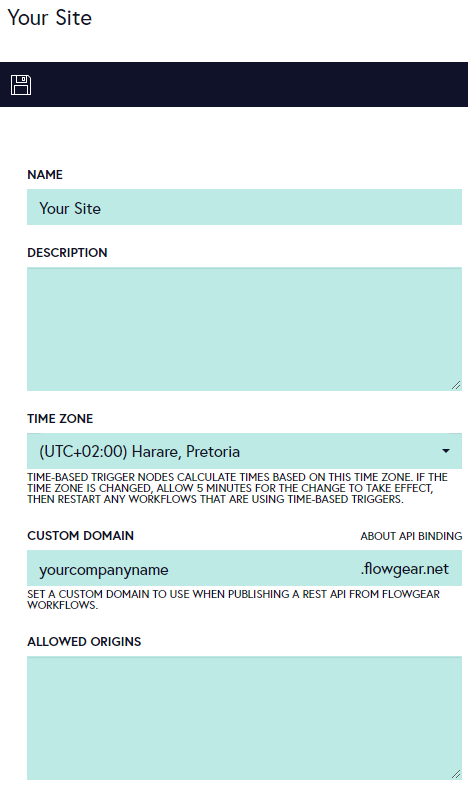 Creating a RESTful URI template for a Workflow

Under API Binding, select an HTTP method and provide a RESTful path template.

The 2020 passed in place of year will be set on a Variable Bar variable called year.

The value specialreport will be passed to the Variable Bar variable reportName.

All calls must be authenticated. Flowgear provides the following authentication options:

Refer to Configure Variable Bar for a list of HTTP request and response properties that are available.

To use these properties, simply include them in the Variable Bar. Note that you do not have to work with both HTTP request properties as well as HTTP response properties. For example:

https://flowgear.me/s/Di0pBLU - A Sample Workflow illustrating how to bind a GET request

C# Simplified Example - A simple C# example that can be used to send and receive payloads as strings.