The Activity Log Pane is available as a primary pane and also displays when a Workflow is executed inside the Workflow Design Pane.

The Activity Log Pane presents a list of all Nodes executed including start time, duration, description and Node Properties and their values at the time.

Once a set of Activity Log results have been loaded, you can use the Search/Filter component (displays in line with the column headers) to either highlight or filter the results that are loaded on-screen.

The two coloured circles on the left represent the Workflow ID and Workflow Instance ID respectively. The same colour will be used to represent these ID's every time you search the logs. 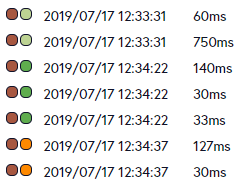 The timestamp columns appear below the Search and Filter UI and do not have named column headers. These columns indicate the date and time at which the Node started to execute as well as the execution time rounded to ms, secs or mins depending on the execution time. Hover the date/time to see the exact date/time range.

Note that the time shown is always local to the timezone of the computer being used to browse the logs.

When a child step is executed, the child Nodes are also indented with an appropriate number of bullets so that the logs present similarly to a treeview. In such cases, an expand/collapse icon is also provided to allow child rows to be collapsed.

A Node execution is considered to be a child step if it follows a Trigger (e.g. Day Scheduler), an Iterator (e.g. Splitter) or is a sub-workflow Invoke.

The result columns indicate whether the step completed execution successfully. For live logs, an intermediate state may be shown where the step is still executing. For completed steps, either a tick (check) or cross will be shown.

Next to the graphic is the name of the Execution Output that fired. This is empty except for Nodes that have named execution outputs (e.g. The If statement has a True and a False Execution Output) or the Node generated an rrror.